Live aboard – Diving in The Red Sea

The Red Sea + August is a good combination

We visited Hurghada, Egypt, around New Year, and that was a rather cold experience..Not so for our latest water encounter in the same area. We, Ulla and I, just spend a week on a live-aboard trip, together with 11 junior divers from a local youth school called “Gentofte and Lyngbaek- Taarbaek Ungdomsskole”. For six days we sailed from one reef to another and also had the opportunity to visit some of the areas great wrecks.
-That was wiiiiild, 14 year old Elliot said, while he was hanging on the ladder, smiling from one ear to the other, handing his flippers to the helper on deck. During his very first dive here, he just had a close encounter with a group of dolphins. Quiet a starter.
The diving during the week was great. It might be a cliché, that diving in The Red Sea is like diving in an aquarium, but there is just so much going on everywhere with fish and corals all over the place. We didn`t see all of the 1.200 fish species or the 200 species of coral, that you can find in this sea, but we met our part of them – from morays and anthias to scorpion – and napoleon fish. As for the corals, they seem to be healthy. Where many of the coral reefs around the world are suffering from the rise in water temperature, the coral species in The Red Sea are tough and seem to adapt – and also cope with the very high saltiness.
The weather back in Denmark had been rainy and, at best, cloudy. Here the sun was blasting from a blue, blue sky and the water temperature stayed at 29 C ( The Danish waters went to 18 C at the peak of the summer).
One night the diving group ended up in the middle of a feeding frenzy. First we realized that the bottom ,a few meter under us, was alive with a large school of tiny fish. Next thing two giant trevally “flew” out of the blackness and into the fish group. The trallies were all over the place – attacking it from this side and that – from above and below – and then, just as sudden – they disappeared out into the night again.
Before we left home, I did have some scary ideas about, what it would be like to stay with a group of young people in this age-group, and not be able to get away…Well, shame on me. They turned out to be very nice, well behaved and rather quiet. They, on their part, did have one small complaint : They couldn`t get “ on-line” during the whole week. Instead they took up reading books and playing a role game.
All the junior divers agreed to attend the diving course again the coming season so they can return to a week live aboard in The Red Sea next year…and for us, the senior divers, well, we just have to visit the local fitness institute more often, so we can keep up with the youngsters. 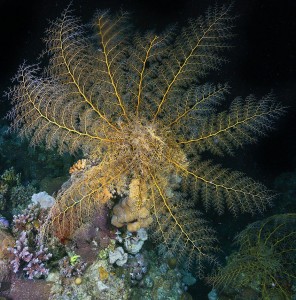 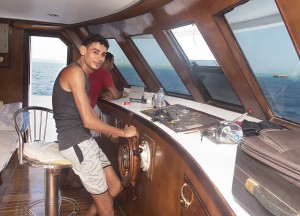 Our second officer helped navigating between the reefs. 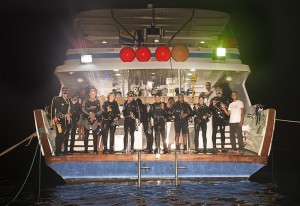 The night diving group ready to plunge into the black, wet world. 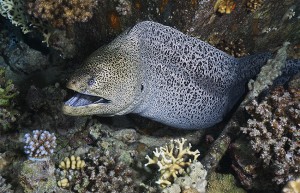 A moray comes out to say hello. 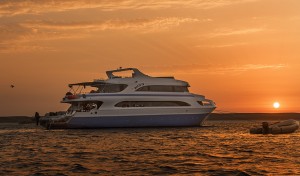 Our home for the week – MACYS IN. 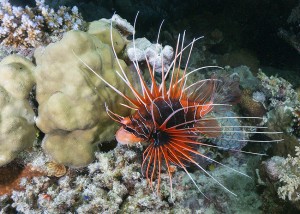 A lionfish pose for a shot during a night dive. 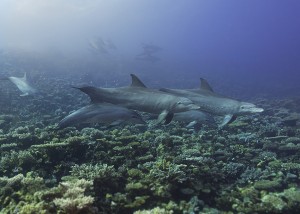 A group of dolphins turned up to wellcome us. 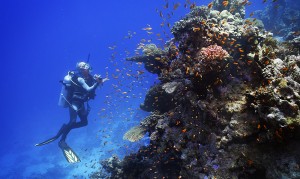 Diving in The Red Sea is like taking a swim in an aquarium. 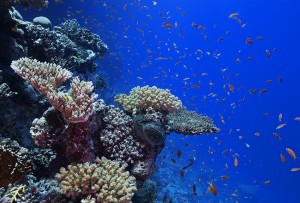 The corals in The Red Sea are tough – They cope with both temperature differencies and high saltiness. 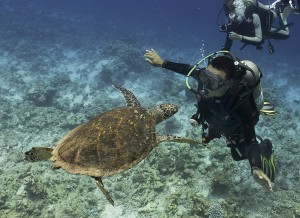 A seaturtle came over to greet our divemaster. 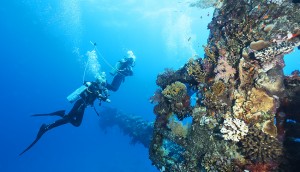 Thistlegorm is a fantastic wreck to visit – both story wise and nature wise.

This entry was posted in Ikke kategoriseret.